A visit to Folly Farm 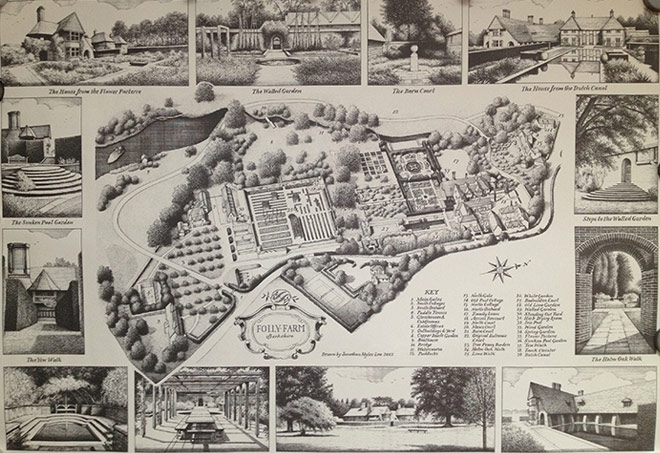 A visit to Folly Farm

I have had the luck to visit the garden of Folly Farm at the end of May this year – am blown away by its beauty and tranquility. Designer Dan Pearson re-created beautiful borders mainly sticking to the original layout of the garden.

What a stunning garden ! Sadly we were not allowed to take any pictures but this article will give a good impression of what it is like now and was many up to 2007 when a new owner took over the house and garden and started renovating.

Dan Pearson did  a fantastic job in re-creating the look and feel of parts of the garden the way Gertrude Jekyll would have wanted it. She came to Folly Farm in 1919 working with Sir E Lutyens on the garden, who was the Architect of the buildings.

Dan Pearson  is a master in working with nature – either expressed in the grassland and meadows surrounding the property on the outskirts or implemented within the borders in one of those famous garden rooms. Each of the garden rooms – Spring garden, Wind garden, Sunken Pool garden and Flower Parterre garden – step into the limelight once a year with little bursts of interest keep each garden room going for the rest of the year. The rooms are separated by Yew hedges, which date back to the original time.

The Flower Parterre garden is quite symmetrical with red-leaved shrubs, such as Cotinus coggygria and Cercis canadensis providing structures within the squares. Box planting repeat the pattern of squares, Astrantia ‘Claret’ and ‘Roma’, Salvias and Verbenas are the beauties. Geranium sanguine ‘New Hampshire Purple’, Salvia ‘Purple Rain’ and ‘Hot Lips’ striked me as looking exceptional. Yew hedges form the perfect background. When I visited Allium ‘Christophii’ and ‘Purple Sensation’ were at their peaks.

The Wind garden is also based on a square grid (brick banding, beautifully detailed) with major plants such as Cornus alba ‘Kesselringii’ and ‘Sibirica’, Aster divaricatus along the edges as well as Acaena ‘Copper Carpet’. In spring blue Camassias combined with grasses dominate this garden.

One of the highlight for me was certainly the walled kitchen garden with a most amazing new pergola at centre stage covering a table to seat at least 20-30 people. Dan Pearson has detailed this piece in a beautiful, simple way, almost minimalist, using green oak and steel. Surrounding this centre piece are raised beds, either green oak or corten steel which contain vegetables and flowers – Lavender grosso -and low benches for seating.

All paths are constructed with South Cerney Gravel, similar to Breedon Gravel, but locally sourced, a sandstone material, rounded in shape with a cream and buff colour. Also known as Thames Beige and Oxford Stone.

A visit to the gardens of Waltham Place

Any cookies that may not be particularly necessary for the website to function and is used specifically to collect user personal data via analytics, ads, other embedded contents are termed as non-necessary cookies. It is mandatory to procure user consent prior to running these cookies on your website.